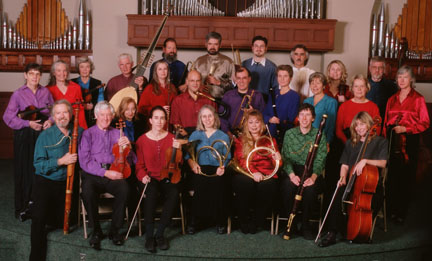 The Jefferson Baroque Orchestra has been performing since 1995 and was founded in 1994 by Jim Rich & Heather Krehbiel. It is dedicated to the faithful recreation of the musical sounds and playing styles of the 17th and 18th centuries. The JBO strives to bring music alive in a manner as close as possible to what the composers and performers of the Baroque and early Classical periods might have done. In pursuit of their goals, JBO members use period instruments or modern copies in order to recapture the transparent timbres and lively articulations described in treatises by Quantz, Leopold Mozart & C.P.E. Bach, among others. Whenever possible, the JBO performs from facsimiles of original manuscripts or from clean modern urtext editions, i.e. those with no editorial markings associated with 19th century practices. Most importantly, members of the Jefferson Baroque Orchestra strive to present their music with the sense of newness, vitality, and adventure that must have been a part of original performances under the composers' own directions. In this way they hope to bring to life a precious part of our common musical heritage that, in these days, can seem so faint and distant. For information on upcoming concerts, please contact us below.