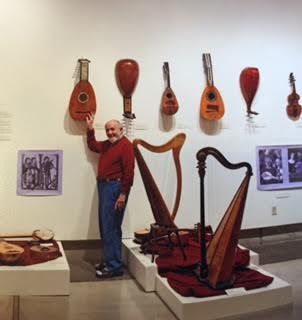 Jack and Dorinda Schuman donated their extensive collection of historical and ethnographic musical instruments to Southern Oregon University in 2008. The scope of this collection included more than 600 instruments from more than a hundred countries as well as a substantial library of books, recordings and photographs. Further gifts from friends, in addition to purchases, have increased the collection to more than 750 instruments today.

The Schuman collection of instruments and related materials grew out of an intense interest that developed in both early music and folk music. This interest was augmented by Jack’s studies in art history. As a graduate student at the University of London’s Courtauld Institute of Art, Jack was engaged in research in early Italian art where musical instruments were often depicted.

The core of the Schuman collection was developed between 1961 and 1968 during travels throughout Europe which brought Jack and Dorinda into frequent contact with musicians, instrument makers, scholars and other collectors. The Schumans’ main focus was on the European tradition often mixed with Islamic elements. During the course of their collecting, their interests broadened to include African, Asian and American instruments as well.