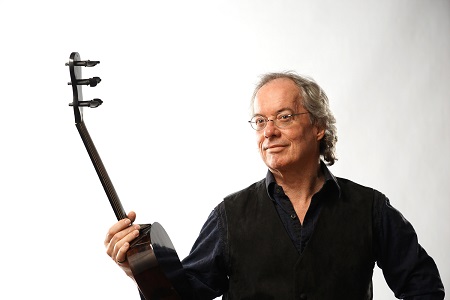 James Bishop-Edwards has been a performer, teacher, composer and recording artist for over thirty-five years. He plays not only the rich and varied traditional repertoire but also his own compositions and contemporary genres as well. James plays historical instruments of the Renaissance and Baroque periods such as the five-course guitar and eight-course lute. He was head of the Guitar Department at Southern Oregon University in Ashland for several years and previously on the faculty as Guitar Instructor at California Polytechnic University in San Luis Obispo.

James has over twenty recordings to his credit which feature his arrangements of American and European classics. Six books of these arrangements have been published by Mel Bay Publications. A few of his many performance credits include: featured artist at the 1999 and 2005 La Guitarra California Festival, the Santa Barbara Arts Festival, Richard Schneiders’ Lost Mountain Guitar Festival, and soloist with the Santa Barbara Chamber Orchestra and Jefferson Baroque Orchestra. He has also worked in duo with vocalists, flutists, violinists etc. and in collaboration with theatre and dance companies as composer/performer. James’ current activities include concerts of early 19th century music on period guitars. James is also working on a historical compendium of American guitar music.